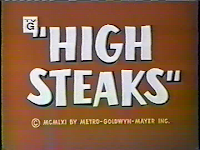 Has it been this long already? Wow. First, I need to apologize yet again for my absence. Life has been very busy and the days go by very fast. I appreciate the kind words I have received from folks and the gentle reminders about my poor, neglected blog. I will try to get back on track with it. 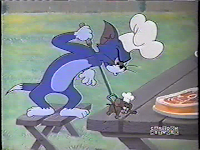 So we move on to 1962 and wrap up this horrible period in Tom and Jerry's career. "High Steaks" is yet another glimpse into the abusive relationship between Tom and his owner. Tom's pain does not really come from Jerry, but rather his hot-tempered owner. 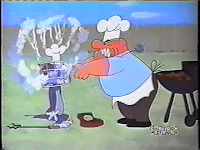 A backyard cookout is disrupted by Jerry's attempts to swipe some of the food and by Tom's attempts to stop him, which always result in Tom pissing off his owner, who inflicts disturbing punishment upon the cat. 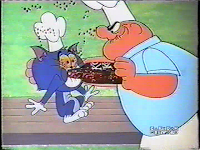 Tom gets his face pressed in a grill and an agitated soda bottle in his mouth before getting tied to a recliner, which I think Jerry hooks onto a car to tow the helpless cat away...or something. I honestly stopped watching after I snagged the last screenshot. It's that bad. 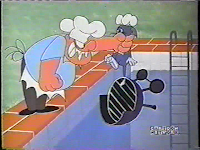 The Tom and Jerry reins would be handed over to Chuck Jones. Jones is one of my favorite directors, but even he could only slightly improve the series. Emphasis on slightly.
Posted by Coyote at 11:22 PM

Yay! An update!
Holy crap, that's even disturbing then I remember as a kid. Still, Landling Stripling is still the worst T&J cartoon ever made, IMO.