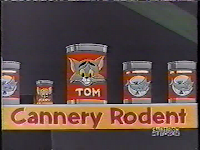 Tom's shark troubles continue in "Cannery Rodent". Why did I pick this cartoon? I actually dig the music over the opening titles. There, I admitted it. 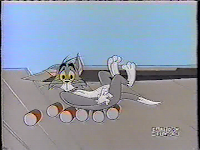 Now that I have gotten that shameful revelation out of the way, let's move on. The cat and mouse chase leads our heroes onto a conveyor belt and into a cannery where they are sealed within properly-labeled cans. 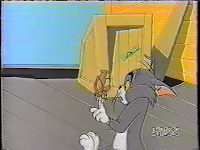 Tom escapes easily with the aid of his claws while Jerry is left trapped in his can until he is captured and released in the same manner. Jerry repays Tom with a bite to the finger. 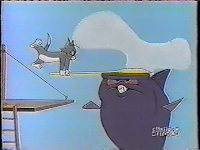 Tom repeatedly ends up in the water below where a hungry shark awaits. In yet another "friendship" moment, Jerry rescues Tom from the shark with some conveniently-placed pepper. Tom doesn't have such an easy change of heart, as evidenced by his devil horns, which quickly pop Jerry's halo. 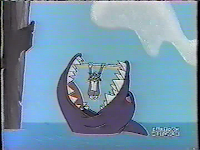 Jerry earns his own devil horns, however, when he uses the classic "fake shark fin" gag to send Tom swimming for his life into the horizon.
This would be the final year for theatrical Tom and Jerry cartoons, but is this the end? Nope. The mandatory wrap-up/conclusion post is forthcoming.
Posted by Coyote at 7:19 PM