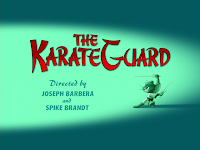 We end our trip through time with Tom and Jerry with "The Karate Guard". Joseph Barbera returned one last time to co-direct this cartoon. He passed away soon after. 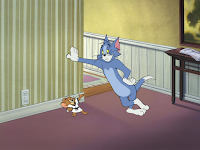 The cartoon takes the idea of Spike being Jerry's bodyguard and puts a martial arts spin on it. Jerry's karate skills are no match for Tom's flyswatter (there's that darn flyswatter again). The mouse is offered help by a mystical mentor who gives a magical gong to Jerry. 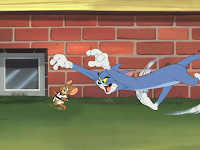 Whenever Jerry is in trouble with Tom, he simply bangs the gong to summon Spike the dog, who pummels Tom in classic violent fashion. Even when Tom attaches pillows to Spike's ears to block the sound of the gong, the cat's good fortune is short-lived. 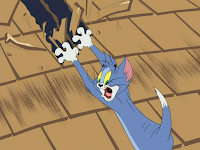 In one impressive scene, Tom is launched directly at the camera, passes it and hits the roof of a house, all in one continuous shot, where he then claws frantically at the roof as he slides down. Tom enlists the help of Butch and his cronies and paintballs prove to be Spike's kryptonite. However, soon the cats are mere bowling pins to be knocked down by a balled-up Tom. 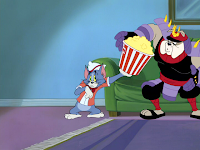 Tom is reduced to a servant, waiting hand and foot on Spike and Jerry, who gorge themselves on popcorn.
As with most cartoon series, the later, lackluster efforts of Tom and Jerry should not diminish the films of thier glory days, when fast-paced action, great music and violent mayhem ruled the screen with hilarious results.
Thanks to everyone who visits here for toughing it out through what became the longest timeline to complete due to my gaps in posting.
Coming up next will be another installment of PD Warehouse. From there...well, I have some ideas for characters who deserve the timeline treatment but I am open to any suggestions as well. Drop me a comment and let me know of any characters you would like to see highlighted here and I will see what I can do. Happy Thanksgiving!
Posted by Coyote at 7:36 PM