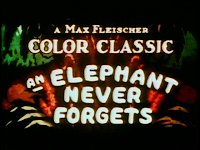 It's time for another edition of PD warehouse. Where cartoons are "breathtakingly restored" after "hundreds of hours of detailed restoration work". How do these companies sleep at night?
Sarcasm aside, today's cartoon comes from the Fleischers in two-strip technicolor for all fans of red and green. 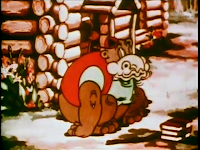 "An Elephant Never Forgets" features a group of jungle animals as children heading to school. The Fleischer's use of a rotating tabletop background behind the cels creates the three-dimensional effect in the opening scenes. A lazy hippo never makes it inside the school, but rather falls asleep just outside the door. 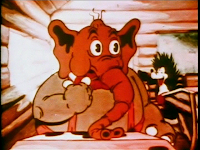 A messy pig is physically disciplined with a smack on the head by the goose teacher. After a musical role call, a bullying gorilla abuses the elephant and the other children mock him for not remembering what two plus two equals. 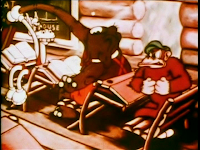 A turtle is left in charge of the classroom who thwarts a giraffe's cheating attempt. While the teacher's back is turned, violence erupts and many a head is bonked with a book. 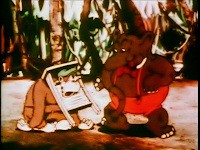 When class is dismissed, the elephant exacts revenge on the gorilla, proving that an "elephant never forgets"...to hold a grudge, apparently.
Posted by Coyote at 9:24 PM