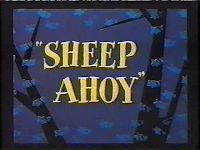 First things first: the characters names are still a jumble here. Sam is Fred, Ralph is Sam. All things in due time, I suppose. 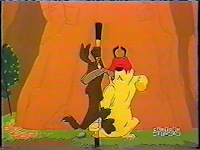 "Sheep Ahoy" finds the wolf awaiting the shift change so he can nab some sheep but of course he isn't quick enough for the sheepdog. This cartoon features a more stationary Sam. He definetely doesn't move around as much as in the first film. I love the fact that not only can the Wolf/Wile E. Coyote not capture a fast character, but he also can't outwit an immobile one. 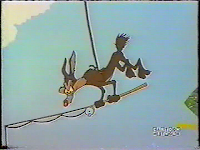 Here we see the wolf not only trying to aquire a sheep, but also turning to murderous plots as he tries to kill Sam, for example, with a boulder. For all of Sam's lethargy, he still packs a mean whallop. 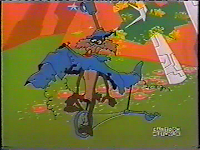 As with the coyote, the wolf defeats himself a lot of the time, such as with a balloon/fishing pole scheme. The film ends with the inevitable shift change, but there's a new element that comes into play this time. Not only does Sam have to stop his thrashing of the wolf to allow his co-worker to take over, but it's quitting time for Ralph as well, who has a co-worker of his own take his place for the resumed beating. 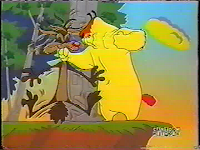 One point that I always find amusing is this: I can see why someone would pay Sam to protect the sheep, but who in the world is paying Ralph to steal them (and most likely eat them)?
Posted by Coyote at 10:03 PM