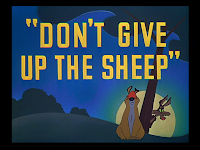 Chuck Jones' Sam and Ralph first appeared in 1953's "Don't Give Up the Sheep". As with most cartoon series, all of the elements didn't come together right from the start. The first obvious point is that Sam is named Ralph! 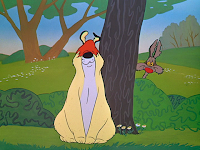 The series revolves around a sheepdog whose job is, of course, to guard a flock of sheep. The job aspect is amusingly highlighted by the dog punching a time clock and relieving his co-worker during a shift change. A hungry wolf creeps along, anxious for dinner. Another aspect of the series that would not emerge just yet is that of the wolf also punching the timeclock on his way into "work". For now he is just a predator trying to score a meal. 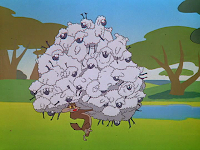 The sheepdog thwarts the wolf's attempts at sheep-nabbing in several "black-out" gags similar to the Road Runner series. After all, the wolf is just Wile E. Coyote with a red nose, although his design in this first cartoon is a bit more scraggly. 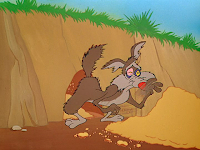 The sheepdog is a bit more active here than in later cartoons. Sure, he is always quick with a fist to the wolf's face, but the dog would eventually become much more stationary.
Messing with the timeclock, unleashing a wild cat (from Acme of course), and disguising himself as the Greek God, Pan, are some examples of the wolf's schemes. 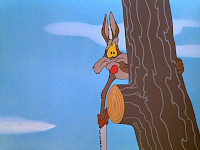 The end of the cartoon sees another shift change occur during the sheepdog's beating of the wolf. The canine co-worker takes over the thrashing with barely missing a beat.
Posted by Coyote at 8:30 PM