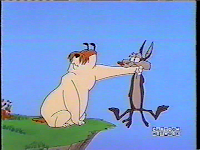 Next up in the spotlight here at the Factory are Sam Sheepdog and Ralph Wolf.
When I was a kid, the Roadrunner/Coyote series were my favorite Looney Tunes. I think it was the lack of dialogue that made the cartoons so easy to follow. So to find "the Coyote" in two other series of cartoons always made it worth it to get up at the crack of dawn on Saturday mornings.

Hearing Wile E. Coyote speak in the cartoons with Bugs Bunny was never really appreciated until I was older, but the Wolf/Sheepdog films were right up my alley and I appreciate them still, but on a completely different level.

Once I entered the world of labor, I began to appreciate the antics of Sam and Ralph all the more. We all have had to do things that we really didn't want to, but we had to because it was our job. Our business lives are completely different from our social lives. There are the themes of the Wolf/Sheepdog cartoons.

An advantage to such a timeline is that I won't have to choose just one film per year, for there was only one Wolf/Sheepdog cartoon released in any given year. Not only will every Sam/Ralph film be highlighted but I get to glorify one of my favorite cartoon series. Stay tooned!
Posted by Coyote at 9:08 PM