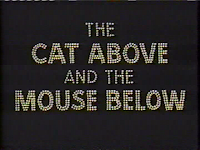 We all know that Tom is able to sing. He does so in "Solid Serenade" for example. The difference between that cartoon and "The Cat above and the Mouse Below", however, is that the former is actually entertaining. 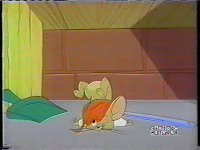 Concert halls are also nothing new as a backdrop for Tom and Jerry's feuding. "Cat Concerto" and "The Hollywood Bowl" come to mind. The difference between those cartoons and this one? I think you know the answer. 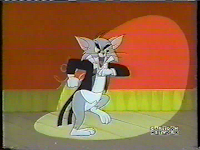 Tom sings excerpts from "Barber of Seville", annoying Jerry, who lives beneath the stage. Jerry attempts many unfunny ways to silence Tom, including a rubber band and publically licking a lemon. 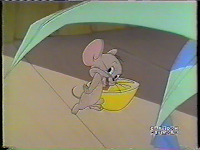 A plunger to the face and a sack to the head, which sends Tom crashing through the stage floor, result in Jerry concluding the opera, which is odd because I thought he was looking for peace and quiet. 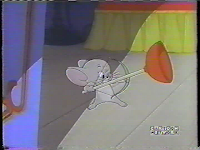 It will only get harder for me to pick cartoons from this period because they are so unmemorable that I have forgotten what most of them are about, and I'm not really in the mood to watch them in order to find out. I've been a bit moody lately, folks. Bear with me.
Posted by Coyote at 7:31 PM