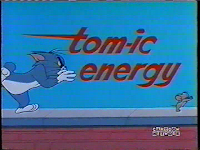 In sifting through the Tom and Jerry cartoons from this period, I can come across a few that are more tolerable than the others. "Tom-ic Energy" is one. I think I enjoy the films where Tom is simply chasing Jerry. No fancy backdrops, no real plot, no forced situations...just a simple chase. 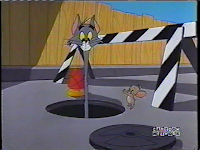 One little detail that I like from Chuck's films is that he sometimes has action occuring during the title sequence. Yes, it results in the eye being distracted from actually reading the names of the people who worked on the film, but I feel it gives things that extra boost of energy right from the start. 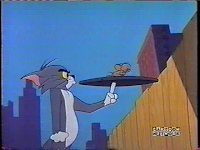 Some gags are typical (a stoplight momentarily interrupts the chase, for example). Not to mention a strange sequence where Tom is mistaken for a female by an amorous cat. Pepe Le Pew would be proud. 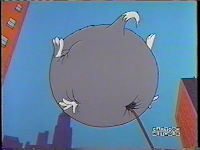 A seemingly helpful act from Jerry is anything but, as the overzealous mouse inflats Tom's body with an air pump, resulting in the classic "deflating balloon" gag. 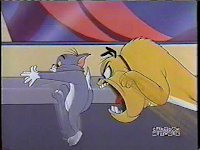 Jerry saves Tom from an angry dog, proving that the two characters actually need each other, filling the void in thier otherwise meaningless existances.
Posted by Coyote at 5:54 PM