As I sat here thinking of what to discuss tonight, a thread over at goldenagecartoons tipped me off to the fact that it is Daffy Duck's birthday. 70 years ago, the duck was unleashed upon an unsuspecting public. Cartoons would never be the same again. 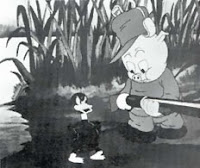 It began in "Porky's Duck Hunt" (1937). Director Tex Avery and animator Bob Clampett set Porky Pig off hunting, only to be confronted by a duck who refused to back down. Daffy was clearly insane, spinning and bouncing on his head as he "hoo-hoo'd" his way across the lake, foiling a flustered Porky at every turn. Porky even pulls out a copy of the script to use as leverage, but to no avail, for Daffy could not be contained in any manner.

Until the arrival of Daffy, characters in cartoons did not act this way. During the early 30's, they sang. They danced. They got into mischief sometimes, sure, but nothing that even came close to the unhinged chaos of Daffy Duck. I always wish I could have seen the audience's reaction in 1937 to Daffy as he behaved in a manner that cartoon characters of the time had never behaved before. Daffy clearly put the "Looney" into "Looney Tunes".

The few pieces of dialogue Daffy has in the film are perfect. After flinging Porky's dog at its master's feet, Daffy explains "Don't let it worry you, skipper. I'm just a crazy darn-fool duck!" Indeed he is.

When Porky's gun fails, Daffy graciously helps the pig get the gun working again. When Porky realizes that it is Daffy who is helping him, the duck simply says, "It's me again" before breaking into more insanity.

The film ends with Daffy sliding and hopping across the "That's All Folks" end title card. No other character was given permission to do such a thing, but then again, Daffy never needed permission to do anything. Just one of the reasons why Daffy remains one of the best cartoon characters of all time.
Posted by Coyote at 6:37 PM

"I Loooove that duck!"

Daffy is my all time favorite. Bugs has a big place in my heart, but Daffy rules my brain. LOL