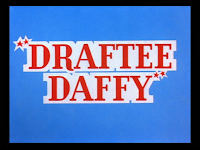 While other cartoon characters at other studios were joining the war, Daffy was dodging the little man from the draft board. This film's plot is quite simple, and yet the results are amazing.

Daffy is filled with American pride until he learns that a letter from the draft board is being delivered to him. 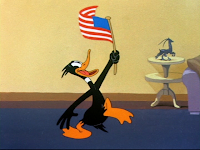 The tables are turned on Daffy here. Usually he is the character who can appear anywhere anytime, ensuring no escape for his co-stars. 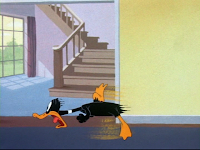 This time there is no escape for Daffy. Even when he runs fast enough to reduce himself to a comet-like streak, the little man from the draft board is always behind every door, thrusting the letter in Daffy's face. 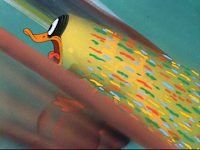 There are some pretty wild "takes" from Daffy, including the moment he learns when he should literally have eyes in the back of his head. 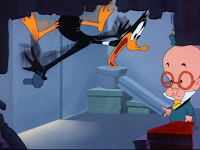 A rocket trip gone wrong makes Daffy believe that perhaps hell will be a safe haven from the army. "Well now, I wouldn't say that." 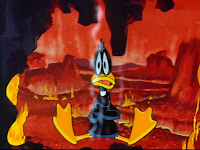 Not much more to say really. Sometimes the films just speak for themselves.
Posted by Coyote at 10:36 PM

Welllll now, I wouldn't say that...
Classic line I like to throw out once in a while.