So, to start things off, I will mention a few upcoming DVDs. 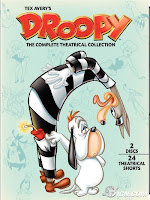 First, WB will release "Tex Avery's Complete Droopy" on 5/15. The set will feature 24 Droopy cartoons. (the 16 Tex Avery's and 8 by other directors) Word has it that if this set sells well, we might eventually see a complete set of Tex Avery's other films from MGM. We can only hope.

Next, the unbelievable has happened. Universal has finally decided to release "Woody Woodpecker and Friends" on 7/24. I'm not too keen on the cover art, but who cares? As with all of the sets mentioned in this post, we have been promised that the cartoons will be restored and unedited! A whopping 75 cartoons will appear featuring Woody, Andy Panda, Chilly Willy, Oswald the Rabbit and others. This looks like it will put to shame the 15-disc Columbia House set that is currently on my shelf. 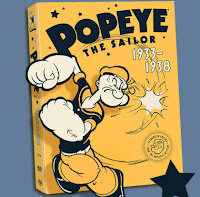 Finally, WB is releasing "Popeye the Sailor: 1933-1938", featuring 60 Fleischer films in chronological order. Release date is 7/31 (one week after the Woodpecker set. Nobody disturb me during these 2 weeks. I'll be in front of the tube.)
Posted by Coyote at 9:56 PM

My bank account is going to be stressed this year...

Indeed. They are killing me, I tell ya! (but it's worth it)