After a brief and dissapointing stint at MGM, Friz Freleng returned to WB. Grateful to have his former job back, he made a film which mirrors his experience. Both he (in real life) and Porky (in the film) left the studio, realized the grass was not greener elsewhere and returned. 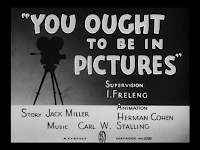 In Friz Freleng's "You Ought To Be In Pictures", some different personality traits begin to emerge in Daffy. Selfish and manipulative, Daffy manages to convince Porky Pig to leave the cartoon studio and seek out a job in feature films, believing that, with Porky out of the way, Daffy will be elevated to top star at the studio.

Probably the best comedy moment for me is that every time Daffy tells Porky how much money he can be making elsewhere, the price increases.

Blending live-action with animation, the film shows Porky saying farewell to boss Leon Schlesinger and then getting into all sorts of trouble around the movie lot. 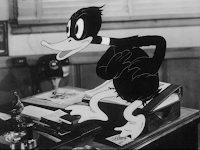 Daffy seizes the opportunity to promote himself to Leon as the future of WB cartoons. The duck cannot contain himself as he warbles opera, thumps his rear on the floor and scatters around the office, delighting in his greatness. Before he can seal the deal, Porky returns and shows Daffy just how much he appreciates his "help". 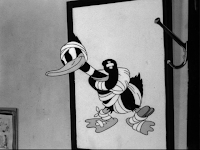 This personality of Daffy as a self-preservationist would be taken to an even further extreme by Chuck Jones later in the duck's career.
Posted by Coyote at 10:55 PM

Love this classic cartoon!
The boys at Warners should have developed more of these live action/animation shorts using Bugs or the other characters!