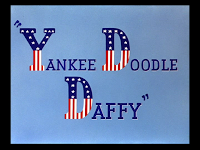 It was easy for me to pick a Daffy Duck film from 1943 to discuss. "Yankee Doodle Daffy" never fails to make me laugh...a lot.

Porky Pig closes up his talent scout office to catch a plane, only to be ambushed by talent agent Daffy. Daffy physically plants Porky in a chair and forces him to listen while the duck tries to promote his client, Sleepy. Sleepy serves no real purpose here, other than to give Daffy an excuse to harrass Porky. 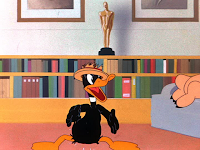 Daffy gives Porky his card, then prompty takes it back. Soon, Porky is trapped as Daffy launches into the most twisted renderings of songs ever. Daffy leaps from one tune to another, giving his manic spin on each of them. He opens with "Wild about Harry", then after stopping Porky's escape attempt, breaks into a banjo solo. Not missing a beat, Daffy is instantly in drag, performing some high-speed, hip-shaking shenanigans.

The look of desperation on Porky's face is priceless as his failed attempts of escape from the office are thwarted by Daffy in full Paliachi garb, insanely hooting through "Laugh, clown, laugh". Daffy rides on Porky through the room like a cowboy for no apparent reason, but no reason is needed for Daffy to do such a thing. Insanity has never been so funny. 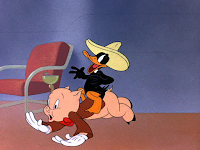 Porky learns that even a locked safe is not enough to contain the zany duck, for as he escapes to his plane and breathes a sigh of relief, it is revealed that Daffy is the pilot. Daffy's wartime song in the plane always fills me with patriotism and the urge to salute becomes rather strong. 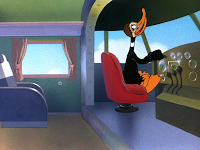 Porky's leap from the plane proves to be no escape as his parachute contains nothing but Daffy himself. A fast-paced, vocal version of the William Tell Overture by Daffy forces Porky fleeing back to the office. 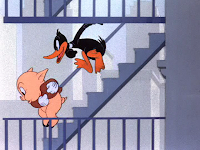 Daffy's movements are now so frantic that multiple images of him fill the screen, each one performing various circus acts to the tune of the "can-can." Porky finally reaches his breaking point and we learn that Sleepy is not all that talented after all. 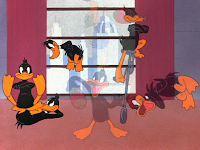