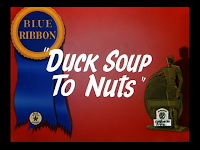 As I move along here, I am realizing that I really enjoy the cartoons in which Porky (or any other character for that matter) is rendered completely helpless by Daffy's lunacy. There is really nothing that he can say or do to restrain the duck. Such as it is in "Duck Soup to Nuts", in which Porky seems not to have learned his lesson from his last hunting expedition and once more takes up his rifle.

Daffy quickly informs Porky that he should think twice before shooting him, due to his extraordinary talents. Daffy demonstrates by singing, dancing and producing his Warner Bros. contract as proof. 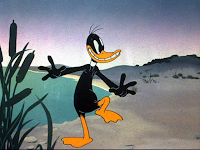 Daffy then asserts his acting skills by tossing a blonde wig upon Porky and swooning over him like a love-struck frenchman. Enter the villian, as Daffy throws on a cape and top hat, twirls his new mustache between his fingers and proceeds to chase Porky around a rock. Appearing much like a silent movie villian, one might think that Daffy would tie Porky to some railroad tracks if he caught him. 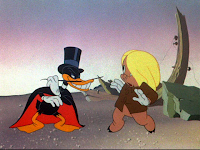 When Daffy peers into porky's gun, he witnesses a bathing beauty residing within, however, when Porky looks into the gun, he sees...well, something completely different. 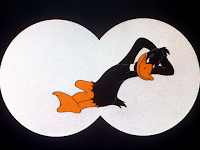 Using fast-paced word play, Daffy convinces Porky that the pig is an eagle. While Porky climbs a tree to prove his flying abilities, Daffy, with his back to the audience, turns his head to the camera and gives us a raise of his eyebrows. Acknowledgment of the audience was always a welcomed aspect of Looney Tunes, making us feel as though we are in on the joke. 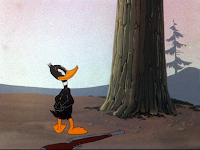 Even with a certain rabbit as the biggest star in Looney Tunes at this time, Daffy proves yet again that no character can top him in the realm of "looniness".
Posted by Coyote at 11:40 PM

Are you getting these images from bmode? ;)

I don't know what bmode is, but I am using vlc for screengrabs.

Love the scene where Porky is going to execute Daffy and his "family" wanders in. The animation on the spit always gets me.