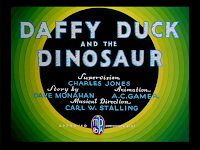 "Daffy Duck and the Dinosaur" was Chuck Jones' first film featuring Daffy and right from the start, Jones puts his own spin on the duck. Daffy is slightly more in control of himself in Jones' hands (slightly is the key word). Clearly, Daffy is in control of the situation (at least until the film's end). He is able to make his opponent respect his authority over the cartoon's universe. 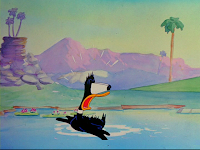 Casper Caveman (a charicature of Jack Benny) and his pet dinosaur, Fido, are on the hunt for breakfast, and Daffy is the main course. Catching the duck is no easy feat, as Casper learns. When threatened with a slingshot, Daffy only has to don a police officer's uniform in order to bring the hurtling stone to a halt.

Fido takes the brunt of the stone and waltzes through a wobbily delerium. Meanwhile, Casper begins to jump into the lake after Daffy, but the duck holds him at bay with a "Positively No Swimming" sign. 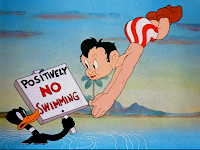 Daffy paints a self-portrait upon a rock for the caveman to strike. Just as in "Porky's Duck Hunt", Daffy offers assistance to his foe, showing good sportsmanship for just a few seconds before luring them into his next trap.

The caveman and Fido walk deliberately but blindly, lured by signs and advertisements complete with guiding arrows planted by Daffy, to a gigantic inflatable duck. Daffy has not thought this out completely, for when Casper stabs the duck, it explodes, killing all three characters. Daffy admits the oversight to the audience, a little too late. 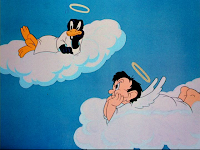