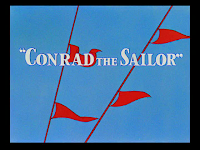 Conrad is a rather forgettable character. Daffy Duck is not. In Chuck Jones' "Conrad the Sailor", Daffy is aboard a ship seemingly for the sole purpose of taunting and tormenting Conrad. 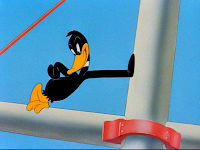 Daffy mocks Conrad's singing (rightfully so), changes his mop bucket for a paint bucket and twists Conrad literally at every turn.

The speed of the characters is what always draws me into this film. In practically every scene, either the characters' body parts, or thier entire bodies, are reduced to nothing more than blurs, as Conrad chases Daffy around the ship. 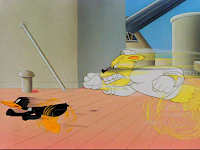 The pair must halt the chase several times in order to properly salute the captain as he quickly shuffles by. Even a speeding torpedo must obey this rule.

Daffy's references are as obscure as they come. "Very petite, Betsy." "Very sloppy, Roscoe. You're a slovenly housekeeper." I've never taken the time to investigate them since they are funny regardless.

As Daffy rides the torpedo through the air (twice), races across the deck with Conrad (with yet another pause for the mandatory salute) and then speeds into the distance, we are left with the feeling that the action will continue on, even after we are told "That's All, Folks!" 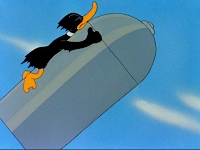