I promise I will not bore you with my personal life here but the following fact does have something to do with cartoons. I promise.

I am currently trying to quit smoking. Rather unsuccessfully, I might add. I think back to when I started and nowhere in my memory bank can I find the thought "I think I will start smoking because Tom and Jerry did it."

Now, I know that the edits being done to Tom and Jerry on Boomerang is old news now, but I just need to discuss it anyway. I just cannot seem to understand the belief that children can be so easily swayed by a cartoon character, that they would begin to mimic thier unhealthy habits. Maybe it really does happen, I don't know. If it has, I would like to know. If anything, I would think that kids would be more influenced by real-life actors. Should Casablanca be edited because of Bogart's smoking? Not on your life. 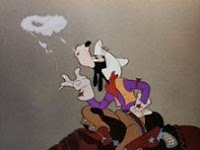 The most glaring example that I can think of right now is Disney's "Saludos Amigos" Gold Collection DVD. The scene of Goofy smoking has been made "socially acceptable" and yet during one of the live-action segments, a Disney artist aboard the plane can be seen...you guessed it...smoking!

All I need to say is this. Where DVDs are concerned, if 500 warning labels need to be plastered across the case, warning all who buy it of the potentially damaging and scarring scenes depicted within, so be it. You will get no complaints from me as long as the content on the disc is unedited. As for television, there are ratings systems now for a reason. Slap Tom and Jerry with an MA rating for all I care. Just stop editing our cartoons.
Posted by Coyote at 6:48 PM

You know where I stand on the great eval that is the cigabutt. A testament to how addictive it is, is that they can raise the price to $7.00 and people without work will still buy them.
Death to cigarettes!

Hey, WF! Thanks for stopping by.
Yes, it's very tough but I will do it.

I will definitely be making a mockery of this 'banning smoking in cartoons' issue in an upcoming Censor Monkeys adventure. Watch for it.