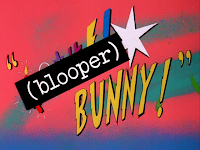 As we enter the final week of our Daffy Duck tribute, we arrive at 1991's "Blooper Bunny". It's Bugs' 51 1/2th birthday and the gang puts on a celebration to honor the rabbit. However, this film shows us the "behind-the-scenes" documentary/blooper reel for the birthday show. 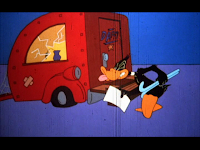 The film is deliberately scratchy, and fades in and out with sometimes jerky camera moves in an attempt to capture a raw, unedited documentary. 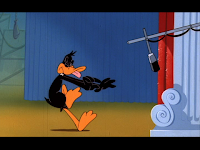 Daffy, of course, is one of the main problems surrounding the filming of the birthday show as he misses his cues, gets whacked with a loose floorboard, bonks his head on the sound person's microphone, and gets delayed in the bathroom. Daffy also comes close to cursing, but Bugs motions for the cameraman to cut. 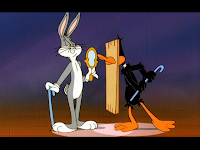 A nice touch is that as the cartoon reaches it's end, "That's all, folks" can be seen scrolling quickly across the film.
Posted by Coyote at 1:41 PM