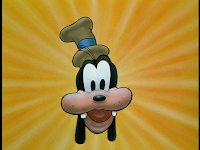 In 1932, a character with a silly laugh had a small cameo in a Mickey Mouse film. From there, Dippy Dawg went on to become Goofy, who starred in arguably the funniest Disney cartoons ever made.
Goofy was not just a fumbling, bumbling idiot for it was obvious that the dog had a heart of gold. (yes, Goofy is a dog). It is always easy to sympathize with Goofy and he is able to make us laugh at ourselves, for his extreme blunders always have a way of making our own goof-ups seem trivial.
So, let's step back to 1932 and follow the career of the one and only Goofy: from Dippy Dawg, to the star of the hilarious "How To" films, to feature film appearances, to the Goof's role as family man and more. See ya tomorrow!
Posted by Coyote at 8:49 PM