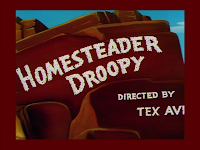 "Homesteader Droopy" is one of those cartoons that got played a lot on tv when I was young. The phrase "It's the lawwwww of the west" became ingrained in my mind. 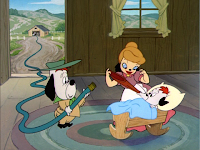 Droopy and his family have set up a home in the old west. The wolf is a dishonest cattle rancher determined to destroy said home. 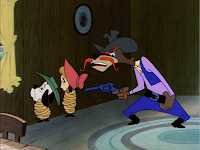 Droopy defends his home and connects a hose to the cow's udder which leads into his son's baby bottle. The wolf's gun is wounded and must be put out of its misery. 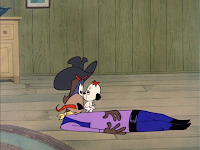 A cruel joke by the wolf makes Droopy, Jr. reach his breaking point and the wolf is beaten into submission by the child.
Posted by Coyote at 3:17 PM

Would Droopy Jr. here become Dribble from Tom & Jerry kids?
Sorry, just thinking out loud.
"It's the law of the West."