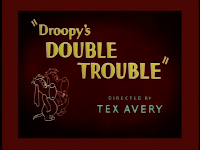 One great thing about Tex Avery's films is that they take a simple plot idea and execute it in unexpected ways. 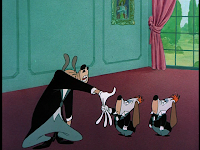 Droopy is a butler who is allowed to hire extra help to tend the mansion while the master is away. Droopy calls on his twin brother, Drippy, who just happens to be very strong. Drippy is instructed by the master not to allow any strangers in the house. 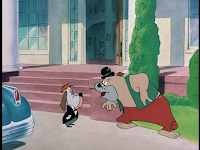 Meanwhile, Droopy invites Spike inside, who is anxious to get a taste of the good life. Spike never sees Droopy and Drippy in the same room at the same time and assumes that they are both the same dog. 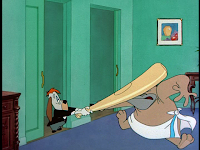 While Droopy tries to make Spike feel at home, Drippy sticks to the "no strangers" rule. Every time, Droopy leaves the room, Drippy enters and pummels Spike in various ways and throws him out of the house. Drippy then leaves and Droopy enters once more to find a disheveled Spike. 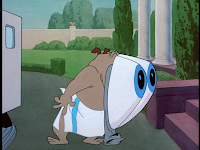 Spike is eventualy driven mad by the sight of Droopy and Drippy together and is hauled off to the insane asylum.
Posted by Coyote at 7:49 PM

This is one of my fave Droopy cartoons! Love Drippy!
Not to sure if it's a tribute, but Roger Rabbit does that very same take at the end of "Tummy Trouble".

Funny you should mention that. Droopy's appearances in the Roger Rabbit shorts gives me a good excuse to highlight those films here as well within the week.