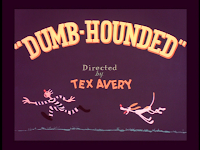 Droopy made his first appearance in "Dumb Hounded", in which he is the hero, a fact that the audience is made aware of by the dog himself. 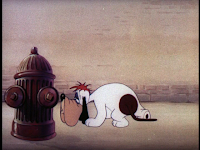 The Wolf, who would be Droopy's nemesis for the first part of his career, has escaped from prison. Quickly the hounds are dispatched to find the convict, but there is one dog who lags behind, whose every step seems to be an effort. It's none other than Droopy. 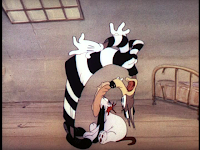 The slow-talking, slow-walking Droopy acts like a regular dog in the beginning. He barks, he walks on all fours, he makes use of a fire hydrant. Soon Tex Avery reveals that Droopy is more than just a dog. He is a character that can transend space and time. 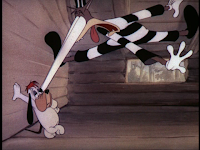 No matter how fast the wolf runs, no matter where in the country he goes to escape, Droopy is always one step ahead of him and arrives before the wolf does. 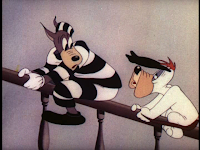 The impossible speed of the wolf, set against the miraculous appearances of Droopy make for great comedy, as do the wolf's "takes". Every time the wolf thinks he has eluded Droopy, he discovers that he has not and his reactions exemplify the Tex Avery style. No simple look of surprise from Avery's characters; his characters must stretch and contort, with thier eyes leaping from thier sockets. Even the wolf's prison uniform reacts to the shock of seeing Droopy. 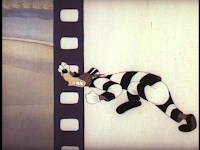 At one point the wolf runs so fast that he runs right off the edge of the film. It's moments like this that remind you that you are not just in a cartoon world, you are in the world of Tex Avery.
Posted by Coyote at 4:50 PM