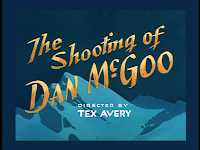 Droopy takes on the role of Dan McGoo who, contrary to the cartoon title's suggestion, does not get shot. 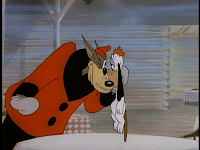 In the town of Coldernell (never get tired of that one), there is a rough 'n' tumble bar where the card dealer is literally crooked and the drinks are literally on the house. Enter the Wolf, who is not satisfied with the whiskey even after it puts him through the wringer. "This stuff's been cut", he admonishes the bartender. 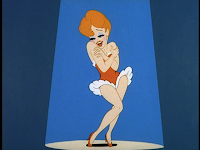 Enter Red, Avery's vixen of choice for his films involving the wolf. Red's performance sends the wolf, as always, into a series of lust-filled tantrums as he physically expresses his desire. 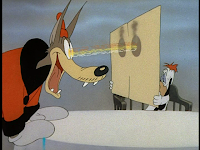 Droopy remains unimpressed. He helps put the wolf's tongue back in his mouth and casually reads the menu, which is burned by the fire of the wolf's eyes. 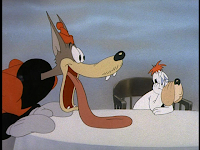 The wolf attempts to kidnap Red but is thwarted by the hero, Droopy, who wins the affection of the damsel. 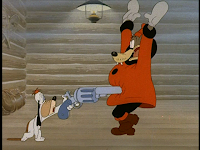 In Droopy's earliest films, the dog would break out of his monotone mannerisms at the end and break loose with complete abandon, before regrouping himself and informing the audience in his usual-calm tone "You know what? I'm happy."
Posted by Coyote at 6:38 PM