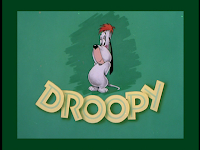 With the release of "Tex Avery's Complete Droopy Collection" last month, I felt it would be fitting to spend the next two weeks showcasing the career of Droopy.

Droopy appeared in theatrical cartoons from 1943-1958 and was really a perfect character for Tex Avery's films. The slow-speaking canine with the lathargic personality worked in perfect contrast with the lightning-speed of Avery's cartoons.

Words usually can't describe Avery's films. There is constant visual humor that needs to be seen in order to be fully appreciated and as always, what will be presented here is only a mere sample of the comedic genius of Tex Avery.

Avery's work at Warner Bros. is but a mere hint of what was to come when he moved to MGM. It was there that Avery arguably directed the funniest cartoons ever made.

So join me tomorrow as we go back in time to 1943 and travel through the years with Droopy.
Posted by Coyote at 8:18 PM