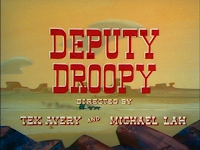 "Deputy Droopy" uses a similar premise to Avery's "Rock-a-Bye Bear". Michael Lah (who would direct Droopy's films in 1957 and 1958) is credited as co-director. 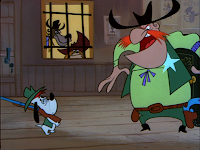 Droopy is an assistant sheriff asked to guard money. He is told by the sheriff that if there is any trouble, Droopy simply has to make some noise to get his attention. Along come two crooks who are determined to steal the money. Soon Droopy is bound and gagged, but the crooks are still in for a rough time. 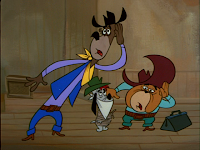 One odd thing about this film is that Droopy gets his hands free and uses them to inflict pain on the thieves, yet he does not use them to simply remove his gag and alert the sheriff. 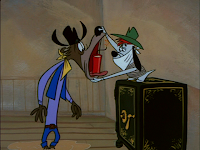 Here the similarities with "Rock-a-Bye Bear" begin. Every time one of the crooks is injured they must flee the building, reach a safe distance, then release thier cry of pain, so that they do not alert the sheriff. Screams are not the only things that need to be done out of earshot. Burps, laughter and a cat's meow must be taken outdoors and some howls of pain must be passed over the telephone or released into a bottle to be carried quickly outside. 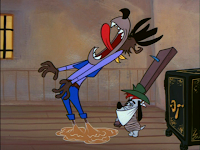 The crooks are finally worn out by Droopy and give themselves up, only to learn that the sheriff would not have been able to hear them earlier, no matter how much noise they made.
Posted by Coyote at 8:44 PM