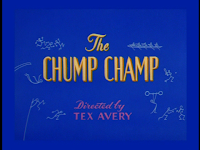 The Wolf was not Droopy's only nemesis and certainly not the best. That title belongs to Spike. 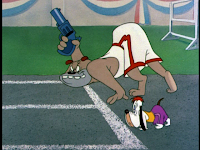 Droopy and Spike compete in a decathalon for a kiss from the Queen of Sports. Spike, of course, cheats every step of the way (although Droopy is not above wearing roller skates during the log rolling competition). Once again, Droopy is shown as a character of unbelievable strength and speed. He wins the dash in about one second and an anvil-filled punching bag is no challange for him. One of my favorite gags is during the baseball competition when Spike uses a bomb for a baseball and throws it at Droopy, who promptly hits it back to Spike just in time for it to explode. 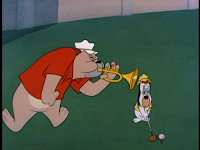 The expressions on Spike are always priceless. He can shift from ecstatic, to villianous, to shocked and horrified within seconds. Spike tricks Droopy into signing a confession of cheating, thereby winning the competiton. However, the prize turns out to be anything but what Spike expects. 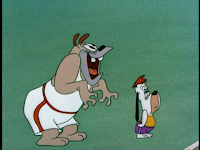