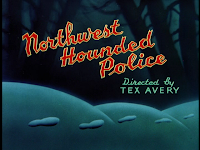 I never know if I should call "Northwest Hounded Police" a remake or a sequel. I suppose it is both rolled into one. 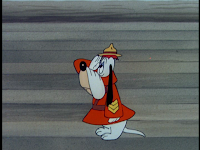 This time the wolf escapes from prison simply by drawing the outline of a door on the wall near his cell. He heads for Canada where Droopy is one of the mounties. 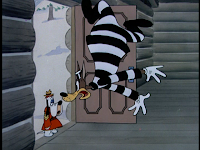 The extreme measures that the wolf goes to in order to escape Droopy are taken even further than in "Dumb Hounded". Underwater, a movie theater and a plastic surgeon's office prove to be no safe haven for the convict. 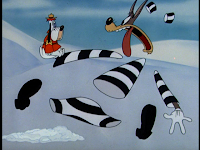 The wolf's "takes" are even more extreme in this film. At every appearance of Droopy, the wolf's body literally flies apart, his prison uniform changes colors rapidly and his face distorts into something from a surrealist painting. 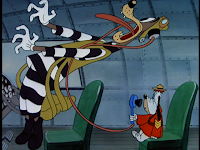 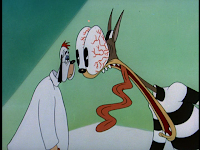 I prefer this film to the first with the exception of the ending. Here, it is revealed that there are actually hundreds of Droopy-like dogs, thus shattering the belief that Droopy himself is able to appear anywhere, anytime.
Posted by Coyote at 9:09 PM