Bob McKimson directed many great Daffy/Porky films in which Porky is cast as the cautious, law-abiding, innocent character thrust into the same space as the out of control, crazy Daffy Duck. 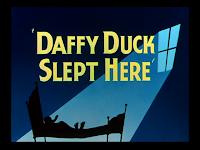 In "Daffy Duck Slept Here", Porky must share a hotel room with a "nice, level-headed fellow". The only problem is that it's Daffy.

Daffy enters the room drunk as Porky is trying to sleep and tries to convince the pig of the 6-foot kangaroo that is allegedly in the room. 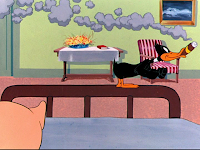 Even once the two climb into bed, there will still be no sleep for Porky, as Daffy's hiccups, blanket-stealing and other trivial issues do not allow for a minute's rest. 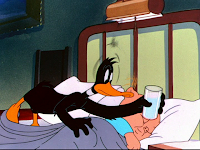 Porky reaches his breaking point and throws Daffy out the window. Daffy gets revenge by convincing Porky that it is now morning and that his train is leaving. The half-asleep pig gets dressed and walks out the window, which Daffy, now a train conductor, has conveniently guided Porky out of. The joke is on Daffy however when it is revealed that there is, in fact, a train outside the window. 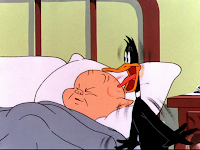