Note: Just so nobody thinks I have forgotten, I am deliberately skipping over a certain 1972 tv special called "Daffy Duck and Porky Pig Meet the Groovie Goolies". I have never seen it and therefore can't really comment on it. Anyone interested in it can get some info from this page over at Cartoon Research.

Also, in 1979, "The Bugs Bunny/Road Runner" movie was released. It did feature some of Chuck Jones' Daffy cartoons, however, there is nothing new to see as far as Daffy is concerned. 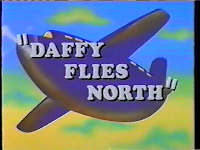 "Daffy Duck's Easter Special" appeared on NBC in 1980. It consisted of three new cartoons starring Daffy: "The Yolk's On You", "The Chocolate Chase" and today's featured cartoon "Daffy Flies North". 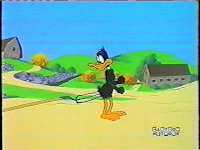 Daffy can't keep up with the other ducks while flying, so he ditches them and attempts to get north via ground travel. 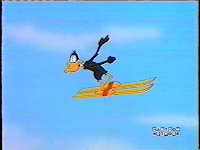 Hitchhiking doesn't work, only resulting in Daffy being chased by hunting dogs and being dunked in the lake courtesy of a runaway armchair. Lassoing a car with skis on his feet sounds like a bad idea to begin with. 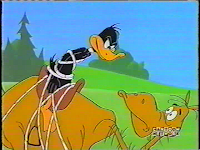 The majority of the film involves Daffy's attempts at forcing a horse to carry him. 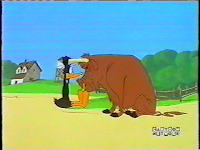 A run-in with a bull sends Daffy running onto a plane, but of course the plane takes him in the opposite direction of where he wanted to go in the first place.
Posted by Coyote at 11:25 PM