The compilation movies of the 1980's do feature new animation of Daffy Duck, however the films are mostly dominated by Bugs Bunny.
In 1981's "Looney Looney Looney Bugs Bunny Movie", the third act finds the characters at the "Oswalds", an Oscar-like ceremony for cartoon characters. Daffy feels slighted, of course, at not getting a nomination and challenges Bugs to an entertainer's duel, giving the opportunity for "Show Biz Bugs" to be incorporated. 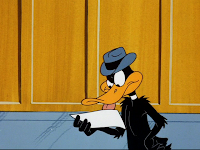 Bugs ends up at the palace of Sultan Yosemite Sam and is forced to read stories to Sam's spoiled son. In this way, the classic cartoons are woven into Bugs' tales.
Daffy reappears at the end of the film, lost in the desert. 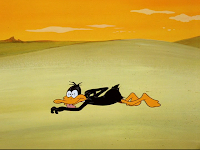 Seeing the palace that Bugs has just escaped from, Daffy thinks he has hit paydirt and runs up to sell some books, despite Bugs' warnings. 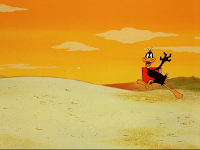 Daffy refuses to read Sam's son any stories, resulting in his being plucked from head to toe.
The compilation films were a good way to use the classic cartoons, blended with some new animation, to keep the public aware of the characters and of the great films that were made in the 40's and 50's. 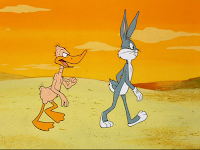