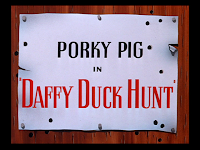 Porky still hasn't learned his lesson. He takes up his rifle once more in "Daffy Duck Hunt". However, truth be told, Porky really is not on the receiving end of Daffy hijinks this time, but rather Porky's dog (who bears a striking resemblance to Barnyard Dawg from Bob McKimson's Foghorn Leghorn series). 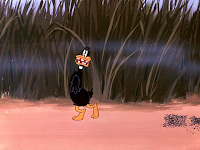 Daffy taunts Porky and his dog after tampering with the ammunition. Daffy also shows that Bugs Bunny is not the only character who can play around with gender roles. 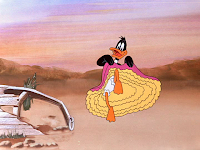 Daffy strikes a deal with the dog and agrees to be caught. At Porky's house, the dog backs out of the deal, leaving Daffy no choice but to cause as much trouble as possible for the canine. 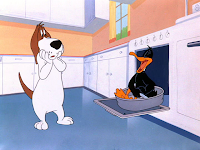 Porky, believing that Daffy is dead, is clueless whenever he finds the duck in the dog's mouth, and punishes the dog for Daffy's antics. Some scenes really need to be seen in order to be appreciated, such as Daffy using the dog as a sled in his re-enactment of a winter drama. "We had to get that serum through." 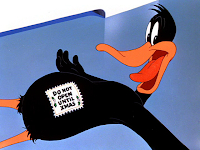 How can Daffy bide time to figure a way out? A simple "Do not open until xmas" sign upon his stomach should to the trick.
Posted by Coyote at 10:59 PM