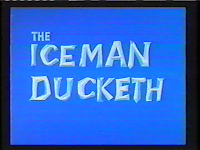 Directed by Phil Monroe, "The Iceman Ducketh" is the only film where Daffy appeared in 1964. It was the beginning of the end for theatrical Looney Tunes. 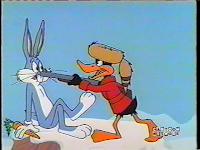 Daffy learns that he can earn money by selling animal pelts and sets his sights on Bugs Bunny. Once again we get to witness "evil Daffy" as he tries repeatedly to kill Bugs. 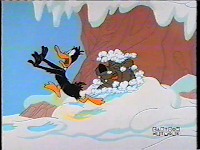 Several run-ins with an angry bear and several misfired plots leave Daffy fuming and hurting. A run-away snowball and a frozen replica of Daffy are just two objects that foil him but he keeps trying because, as he says of Bugs, "I despise him!" 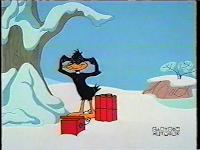 One odd gag is when Daffy places dynamite down Bugs' home, yet when Daffy moves back to a safe distance with the charger, the rabbit hole moves across the ground with him as he pulls on the wires. Weird.
Eventually Daffy is trapped up a tree by a clan of bears. 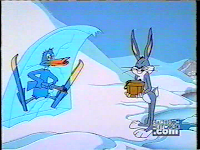 It's a bit sad to watch these later cartoons, knowing that the former glory of the Looney Tunes (and in this case, the character of Daffy Duck) would never be the same again.

The WB cartoon studio closed down, but was resurrected by Depatie-Freleng. It may have been the end of an era for Bugs and the majority of his co-stars, but a few characters found a new home, such as Roadrunner, Coyote, Speedy and....our current star of the Acme Factory, Daffy Duck! He would go on to appear in theatrical cartoons from D-F productions for the next four years.
In short, That's NOT All, Folks!
Posted by Coyote at 6:38 PM

Best LT for me personally, were the ones from the 40's.

No doubt about it!