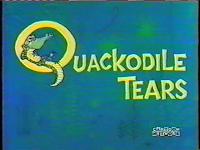 Directed by Art Davis, "Quackodile Tears" gives us a glimpse at Daffy's domestic life with his boisterous wife "Honey Bunch". 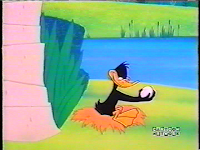 Daffy is emasculated by his wife by being forced to sit on an egg until it hatches. While adjusting the nest, the egg rolls away from Daffy and into a nest of crocodile eggs. 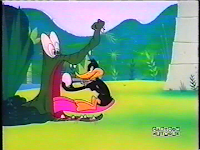 Figuring that "an egg is an egg", Daffy simply takes one to replace the one he lost. The crocodile family is none too pleased with this thievery. 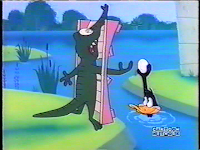 The film then consists of Daffy and the crocodile snatching the egg back and forth between themselves in an attempt to return it to each of thier prospective nests. 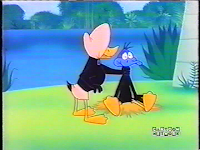 There are interruptions from the wife ("Now pick up your face and sit on that egg!"), but the end result is that Daffy ends up with a crocodile baby and the croc ends up with a baby duck.
Posted by Coyote at 5:13 PM