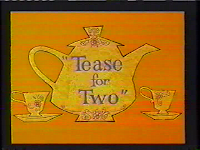 To say that the overall quality of the Looney Tunes decreased in late 1960's would be an understatement. However, I can't bring myself to say that they are a total loss. I've seen much worse. 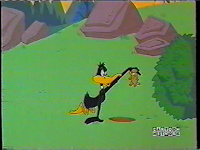 Armed with a map, Daffy is on a quest for gold. The location of the supposed buried treasure is in the home of the overly-polite Goofy Gophers. 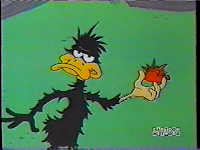 The gophers defend thier home in some very unbelievable ways. They are able to destroy Daffy's car and apparently Daffy's vaccuum cleaner is powerful enough to suck up a bomb from the hole. 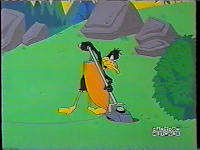 In a rather odd moment, a plugged-up water hose explodes and sends Daffy soaring up into space. The re-entry is a real scorcher, but it seems that the gophers have given him a barrel of water to land in. 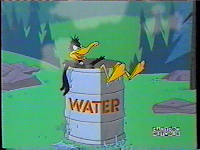 In order to satisfy Daffy, the gophers generously throw some gold his way. However, the "gold" is nothing more than painted rocks.
Posted by Coyote at 9:27 PM

Yeah, Tease For Two (by Robert McKimson c. 1965) is definitely one of the worst Daffy, Goofy Gophers, and WB toons ever made. Even if they DID manage to get Stan Freberg to do the other gopher's voice, it wouldn't have improved it much.