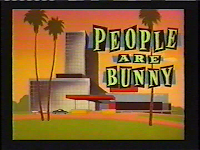 In "People Are Bunny", we witness the gradual transformation of Daffy into quite the villianous character. When he learns that a television studio is giving away a cash prize for the first rabbit brought in, Daffy can't control his greed. He tries the subtle approach with Bugs in an attempt to lure the rabbit to the studio, but Bugs of course is wise to Daffy, leaving the duck no choice but to force Bugs at gunpoint. 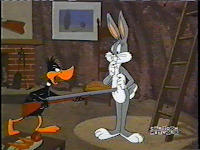 Once at the studio, Bugs uses Daffy's greed against him and tempts him into becoming a gameshow contestant on "People Are Phoney". Via a hidden camera, we witness Daffy's attempt to earn some cash by helping an old lady across the street. Unfortunately, the lady needs no such help. 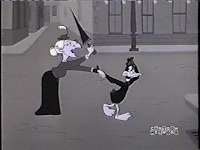 Learning that Bugs has won money simply by answering a question in a phone booth, Daffy can't resist the urge to try as well. Of course, Bugs has altered things in the phone booth just a bit for Daffy. 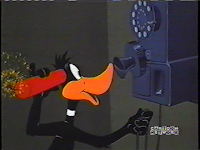 Posing as a costume designer, Bugs tricks Daffy into a rabbit costume, then presents him to earn the prize money for himself. Daffy revealing that he is, in fact, a duck rather than a rabbit does not help him in the least. Good thing they use blanks on TV...or do they? 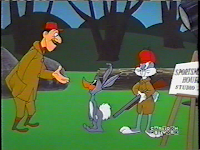