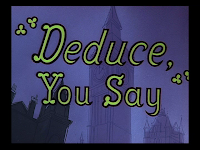 "Deduce, You Say" finds Daffy in Scotland as the great Dorlock Holmes. His assistant Watkins (Porky) narrates. The case of the Shropshire Slasher begins with the arrival of a dead body....no, wait. That's just the delivery man. ("You'd best have that step fixed, Gov'nor.")
Daffy may not be able to solve the case, but he can solve his tax problem by claiming his aunt as a dependant. 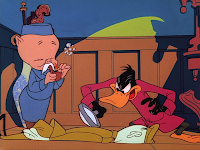 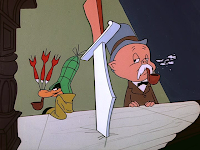 After several failed attempts by Daffy at subduing the large brute, Porky tries a more subtle approach by simply asking the Slasher to return to prison, to which he agrees. 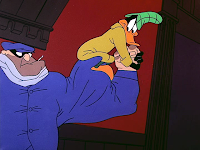 Not leaving well enough alone, Daffy unknowingly harrasses the Slasher's mother, resulting in one last beating for our hero. What detective school did Daffy attend? "Elementary, my dear Watkins, Elementary." 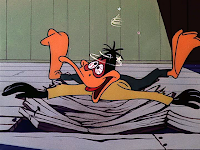 Funny cartoon! Love the designs of the secondary characters.
Daffy's expression is hilarious when he reads the telegram/gets the idea about using his aunt as a dependant.