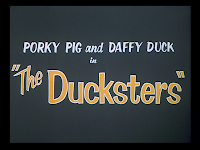 So, it was really difficult to only pick one of Daffy's films from 1950. There are several greats, including "Golden Yeggs" and "The Scarlet Pumpernickel", but I had to go with "The Ducksters". 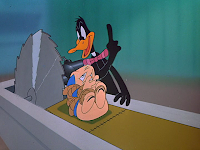 Daffy is the host of a game show that is taken to an extreme. Whenever contestant Porky fails to answer a question correctly, he is subjected to physical abuse from Daffy. 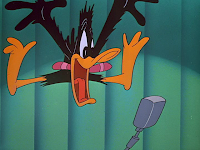 Daffy is as nutty as always, taking glee as he makes Porky "pay the penalty" for not knowing the answers to his obscure questions. He is not above gunning down an audience member whom he believes is assisting the pig. 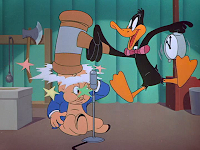 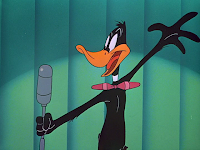 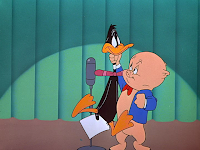 The tables are turned when Porky uses his winnings to buy the company that Daffy works for. Porky then has his moment to put Daffy through the same paces as were inflicted upon him. 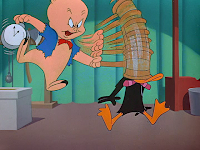 Unlike the beginning of the film (where Daffy stops the saw right before it severs Porky), Porky is nowhere in this last shot which gives me a grim feeling that Daffy is seconds away from his final curtain. 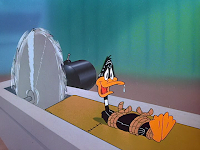 Always felt sorry for Porky in this one. "B-but I'm weary..."
Love the ending on this one!